The Institute of Electrical and Electronics Engineers (IEEE) published the IEEE 1584 “Guide to Performing Arc Flash Calculations” to provide formulas and methods for calculating arc flash values in the workplace. The document provides empirical formulas for determining arc flash values known as incident energy, and arc flash boundaries. The range of the model used ranges from 208V to 15kV, and system fault currents of 700A to 106,000A. Theoretical models from Ralph Lees original paper are used for system conditions outside of the IEEE 1584 ranges. IEEE 1584 details a nine-step process for gathering information and calculating arc flash hazards. 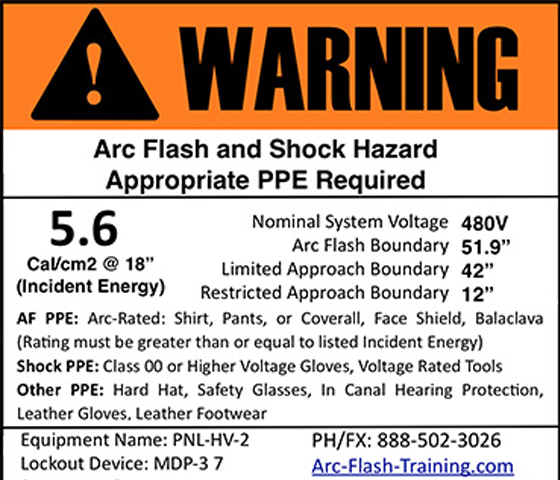 The largest effort in an arc-flash hazard study is collecting the field data. Even for a plant with nominally up-to-date single-line diagrams, time-current curves, and short-circuit study on a computer, the field part of the study will take about half of the effort. Regular site employees who are familiar with the site and its safety practices may be able to do this part of the job best.

While the data required for this study is similar to data collected for typical short-circuit and protective- device coordination studies, it goes further in that all low-voltage distribution and control equipment plus its feeders and large branch circuits must be included.

In a site with a simple radial distribution system there is only one mode of operation—normal—but a more complex system can have many modes. Examples of modes include:

Input all data from the single-line diagrams and the data collection effort into a short circuit program. Commercially available programs can run thousands of buses and allow easy switching between modes. The simplified calculator included with this standard can determine bolted fault currents for radial systems for up to 600 V (see Figure B.1). Find the symmetrical root-mean-square (RMS) bolted fault current and X/R ratio at each point of concern—all locations where people could be working—by making each of these points a bus. Not every bus needs to be run for every mode because some modes will not significantly impact bolted fault current at some buses. For example, connecting transformer secondaries together may not increase fault energy on the primary side.

It is important to include all cables because to err on the high side does not necessarily increase safety: it may reduce it. Lower fault currents often persist longer than higher currents as shown on protective-device time-current curves.

The arc fault current at the point of concern and the portion of that current passing through the first upstream protective device must be found.

The time-current curves of upstream protective devices are the major factor in determining how long an arc-fault will last. An effort should be made to determine the actual settings rather than relying on standard values, as these may cause incident energy to vary greatly.

In the field survey up-to-date system time-current curves may have been found. If not, it is best to create them—commercially available software makes this task easy. Alternatively, for a very simple study, it is possible to use protective device characteristics, which can be found in manufacturer’s data.

For circuit breakers with integral trip units, the manufacturer’s time-current curves include both tripping time and clearing time.

Step 6: Document The System Votages And Classes Of Equipment

Arc-flash protection is always based on the incident energy level on the person’s face and body at the working distance, not the incident energy on the hands or arms. The degree of injury in a burn depends on the percentage of a person’s skin that is burned. The head and body are a large percentage of total skin surface area and injury to these areas is much more life threatening than burns on the extremities. Typical working distances are shown in Table 3 of the IEEE 1584.

Step 8: Determine The Incident Energy For All Equipment

A software program for calculating incident energy must be selected. Clause 6 identifies and discusses the two calculators included with this guide and possible future commercial products. In each case the equations in the models, which appear in Clause 5, are embedded in the program or worksheet. In some programs the problem is solved one bus at a time; with others, hundreds or thousands of buses can be solved simultaneously.

Incident energy is defined in NFPA 70E as “the amount of energy impressed on a surface, a certain distance from the source, generated during an electrical arc event.” In an arc flash hazard study, the “surface” is the worker’s body at the assumed working distance. Incident energy is expressed in calories/cm2. IEEE 1584 uses the following formulas:

Step 9: Determine The Flash-Protection Boundary FOr All Equipment

The FPB is the distance at which incident energy is 1.2 cal/cm2, which is the amount of heat needed to cause second-degree burns. The IEEE formula for calculating FPB is:

where EB is the desired incident energy at the boundary (usually 1.2 cal/cm2, but occasionally set at a value matching proposed PPE rating), with other variables defined as for the incident energy equations above.

EDS specializes in many different aspects of electrical training and engineering.

All training courses are available in affordable prices.

To get a free no obligation quote, please email us your details or call us and we will get back to you the same day.